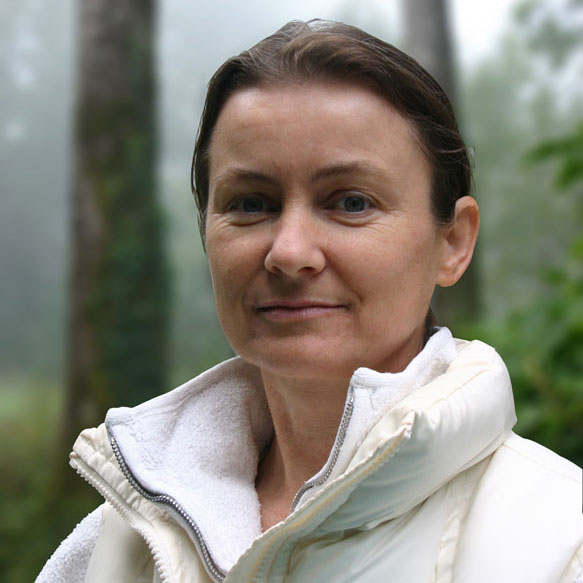 Hildegard Huber has been a student of the Most Venerable Phra Prom Mongkol Vi (Phra Ajahn Tong Sirimangalo) since 1992. During her first eight months of practicing Vipassana meditation and as an assistant to Luang Poh Banyat and Khun Thanat and Khun Kathryn Chindaporn, she recognized the wealth of the Dhamma, which opened up a new perspective on her life. In 1993 Hildegard Huber returned to Germany and started teaching next to her health food store. Since 1994 she has organized meditation courses for Venerable Ajahn Tong and Khun Thanat and Khun Kathryn Chindaporn in Germany, France, Slovenia and Sweden. She assisted the teachers on these courses.

Several long stays in the Thai monastery gave her the opportunity to meditate and teach under the guidance of Venerable Ajahn Tong. In 1998 the Venerable Ajahn Tong authorized her as a Vipassana teacher and gave her the name Dhammacari. Since then, Hildegard Huber has been leading the courses alone and in 2004 gave up her worldly professional life entirely. In September 2004, at the suggestion of Venerable Ajahn Tong, the Dhammacari Vipassana Meditation Center e.V. was founded with the aim of establishing a meditation center in Germany. This was opened in February 2006 in Sonnenthal (near Munich). Since then Hildegard Huber has lived and taught there. Through her many years of meditation practice, she can convey the knowledge and knowledge of teaching in a form that is understandable to everyone. But not only does she pass on her knowledge, but with her gentle nature she accompanies her students in a sensitive way in her meditations. In a deeper sense, this is expressed in the name Dhammacari: A Dhammacari is a person who practices the Dhamma – or is in the Dhamma – a person who grows in the Dhamma. A Dhammacari in not necessarily a person who studies a lot, who has a great knowledge of all kinds of scientific work, who has perfect memory, who can recite whole scriptures and chants, who has great ideas or wonderful stories, poems or books about them Teaching writes. A Dhammacari is simply someone who has achieved knowledge through the practice of Vipassana meditation, who receives knowledge from within, and who knows all things as they really are. In May 2011, she was awarded the “Annual Benefactor of Buddhism Award” in Chiang Mai, Thailand for her services to the Dhamma through the Sangha. Further awards followed in May 2012 in Chiangmai again by the Provincial Government: The Benefactor of Buddhism Award and in Bangkok by HRH Princess Maha Chakri Sirindhorn of Thailand for the “Sao Sema Dhammacakka” (also known as the Golden Pillar of Dhamma) for Benefactors of Buddhism, both awarded for spreading the Dhamma abroad.